The Payment Times Reporting Act 2020 (the Act) introduces a new requirement for large businesses and large government enterprises with an annual total income over $100 million to publicly report on their payment terms and practices for their small business suppliers.

The scheme starts on 1 January 2021 and applies to all companies and other constitutionally covered entities carrying on an enterprise in Australia where:

The Act cover most entities (both domestic and foreign entities), apart from those that lie outside the constitutional power of the Commonwealth to regulate.  As a result, it applies to all companies, trusts, partnerships, unincorporated associations, and Commonwealth and Territory entities that are subject to the Commonwealth’s powers.

Nevertheless, the Act explicitly does not apply to entities registered under the Australian Charities and Not-for-profits Commission Act 2012.

The Act refers to terms and concepts used in other legislation and requires careful analysis to determine which entities are within the scope of the Act. For example:

P has total income of $80 million and prepares financial statements that comply with Accounting Standards. P owns 47% of the issued capital and voting rights of A, which has total income of $50 million.  Based on the absolute size of its holding and the relative size of the other shareholdings, P concludes that it has a sufficiently dominant voting interest to meet the power criterion and consolidates A in accordance with AASB 10.  As a result, P’s annual financial report discloses consolidated total income of $130 million.  As P does not own more than one-half of A’s issued capital or controls more than one-half of A’s voting rights, A is not a member of P’s controlling group.  As a result, neither P or A is required to prepare a Payment Times Report.

How we see it

The Act predominantly uses terminology and concepts derived from the corporations and tax legislation.  However, those concepts and terms do not necessarily align with Australian Accounting Standards.  Entities and groups will need to closely examine whether they, and which entities within an accounting consolidated group, are subject to the Act.

Who is a small business supplier?

A small business is one that carries on an enterprise in Australia and its annual turnover (within the meaning of the Income Tax Assessment Act 1997) was less than $10 million for the most recent income year.

A Payment Times Small Business Identification Tool is being created by the Department of Industry, Science, Energy and Resources to assist entities identify which entities are determined to be small businesses. The Tool should be available in December 2020.

How we see it

At present, a number of questions exist over how entities will identify their small business suppliers and we await details of the final payment times reporting Rules and further clarity over the Act’s implementation.

The Act does not mandate that small businesses must be paid within a certain period. Rather, affected entities will be required to prepare a Payment Times Report for each six months period which is designed to create transparency around the payment practices and times of a large business in paying its small business suppliers.

Reporting periods will be based on the income year for the reporting entity (the same as the financial year it uses for tax purposes). The first Payment Times Report will include information relating to the first six months of the year and a second report will include information for the remainder of that year.  The reports will be lodged through a reporting portal with a new Payment Times Reporting Regulator, which will form part of the Department of Industry, Science, Energy and Resources.

The key items requiring disclosure in a Payment Times Report include:

When do I have to report? 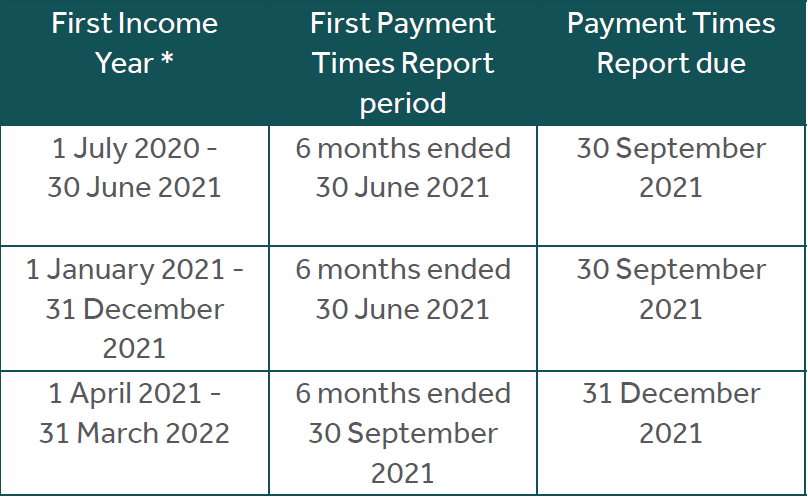 The Act contains penalties for entities that fail to report on time.  The maximum penalties are currently $66,600 per day for a body corporate and $13,320 per day for an individual.

Will you be affected?

As the first reporting window commences on 1 January 2021, affected entities will need to develop an action plan to:

If you require assistance preparing for these changes, or for any further information, please contact Jamie Dreckow or your local Nexia Edwards Marhsall Advisor.