What is the exploration development incentive?

Australian shareholders that invest in small1 Australian minerals exploration companies that conduct greenfields activities2 in Australia may be entitled to a tax offset under the Exploration Development Incentive (EDI)3 in the form of exploration credits.

In broad terms, the EDI is therefore basically a mechanism whereby these small exploration companies, would be allowed to pass on some of the tax benefits of a year’s exploration expenditure4 to their Australian shareholders in the following year (in the form of either a refundable tax offset or additional franking credits). Expenditure on feasibility studies (i.e. activities undertaken to identify the viability of a mineral resource rather than its existence) are not eligible for the offset.

This incentive is capped at a total of $100 million (to be spread across all companies that apply) over its lifespan of 3 years (from 1 July 2014) and consequently, the amount of credits such companies can distribute may not exceed:

Participation in the EDI is voluntary and the decision to create exploration credits is made each year of operation.

How do companies participate in the EDI?

The EDI is a new initiative and many details still have to be ironed out.

However, for 2015 expenditure incurred by the company, it will broadly operate as follows: 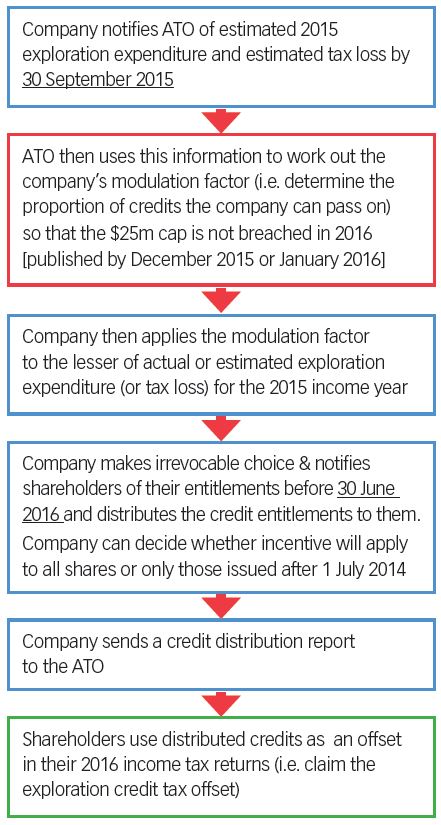 Only Australian resident shareholders who are on the shareholder registry 30 days before the company sends out such notices to shareholders at 30 June 2016 will qualify for the offset.

Such an offset will be excluded from PAYG calculations and will be refundable to a shareholder who does not have any other taxable income.

How can Nexia Edwards Marshall assist you with the EDI?

We can help you through the whole process.

Nexia Edwards Marshall can assist with this record-keeping process as well as:

Please contact an Nexia Edwards Marshall Advisor if you would like to know more about the exploration development incentive and how it can help your business.

1 - The EDI legislation does not define "small" in terms of a monetary amount (e.g. based on specific turnover or net asset value) – and seems to suggest that any company that conducts solely greenfields minerals exploration and prospecting activities will be classified as "small". The company must also be a disclosing entity (within the meaning of section 111AC of the Corporations Act 2001).

2 - Broadly, companies that search for new minerals but do not yet mine for these minerals or have not mined for these minerals in the last 2 years (whether by itself or any other entities connected with or affiliated with the company). The EDI is not available for the exploration of petroleum or oil shale (which includes oil and gas).

4 - Such expenditure will inevitably give rise to a tax loss as the company is not yet earning other income from mining activities.

The material contained in this publication is for general information purposes only and does not constitute professional advice or recommendation from Nexia Edwards Marshall. Regarding any situation or circumstance, specific professional advice should be sought on any particular matter by contacting your Nexia Edwards Marshall. This article originally appeared as an alert on the Nexia Australia website.